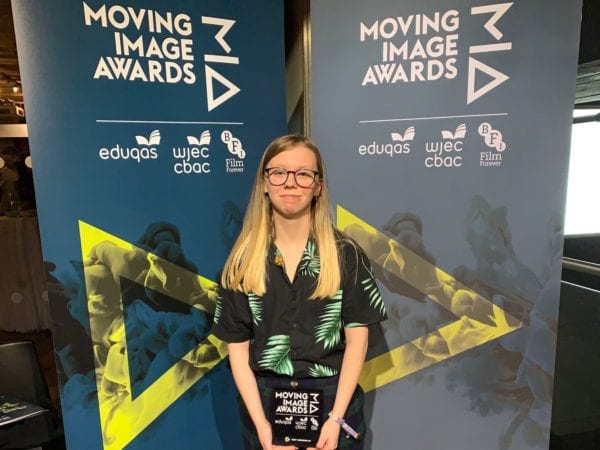 On Monday this week (13 January 2020), ex-Hucknall Sixth Form Centre and Holgate Academy student Britany S attended the Moving Image Awards ceremony at the British Film Institute in London, with her former film studies teacher Mr Morgan accompanying her down there. Britany had been shortlisted for the Best Screenplay award and beat off the competition to win the prize for her screenplay ‘Lost in Fantasy’, written during her A Level in Film Studies.

This is an incredible achievement for Britany to have competed nationally and to be successful. She was awarded a trophy, a £100 cheque and got to attend a masterclass from working filmmakers.

This is the second year in a row that an ex-HSFC and Holgate student has received this award, following the success of Marshall C last year. Well done to Mr Morgan and the sixth form team, together with our talented students.

For more information on the award and the winners, visit www.movingimageawards.co.uk